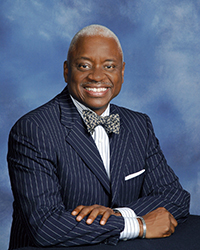 Paul Jefferson comes to us from Dallas, Texas, where he resided most of his life. Paul is the proud son of Thomas & the late Davella Jefferson. He has 5 brothers and 2 sisters and is a graduate of Richland College.

Prior to joining the staff at the Brentwood Baptist Church, Paul served as an independent Insurance Agent for Allstate, for over 20 years. In this regard, Paul enjoyed the honor of having one of the most successful agencies in the state, where he was honored for his stellar performance and achievements for 11 consecutive years. While an independent insurance agent for Allstate, he had a customer base of 2000 plus and an annual premium base of $2,000,000.

Although Paul Jefferson's professional achievements are significant, he derives his greatest pleasure from his role as a mentor and spiritual leader. Paul served as a Deacon at the First Baptist Church of Hamilton Park for over 15 years. Although this was his primary leadership role, Paul also served as the President of the 200 voice Male Chorus and as the Insurance Advisor for the church. Because of his maturity, keen discernment and loyalty, Paul served as a Special Advisor to Senior Pastor, J. Lee Foster.

Paul is active in his community, and seeks to make life better for all around him. God blesses all of us with one gift, but Paul Jefferson has been blessed with many gifts. While working in organizations which assisted the elderly with home repairs and maintenance, Paul also managed to coordinate reading programs for some of the local elementary schools in Dallas. He served in with inner-city youths, and he has been active in ministries involving feeding the homeless and African-American health issues.  Paul is the proud godfather to Alicia, Jordan, Brandon and Devin.

Here at Brentwood Paul serves as the Church Business Administrator. His departments include: Accounting, Human Resources, Administrative Services and The Endowment Program. He is the Facilitator for the Brentwood Community Foundation, Budget Review, Center for Child Development, Federal Credit Union, Scholarship Committee, and Trustees.

Thank you for contacting Brentwood Baptist Church in Houston, Texas. The Church where CHRIST is the MAIN attraction. A member of our team will contact you soon.

Update Personal Details
Your ticket for